Why Is Gucci So Expensive?

In its 100 years of existence, Gucci has become one of the most recognizable brands in the world. With boutiques in hundreds of countries and raking in billions of dollars every year, it’s a top-tier designer brand. The brand’s high-quality product offerings also come with a pricier tag. This article will delve into the factors about why Gucci is so expensive. 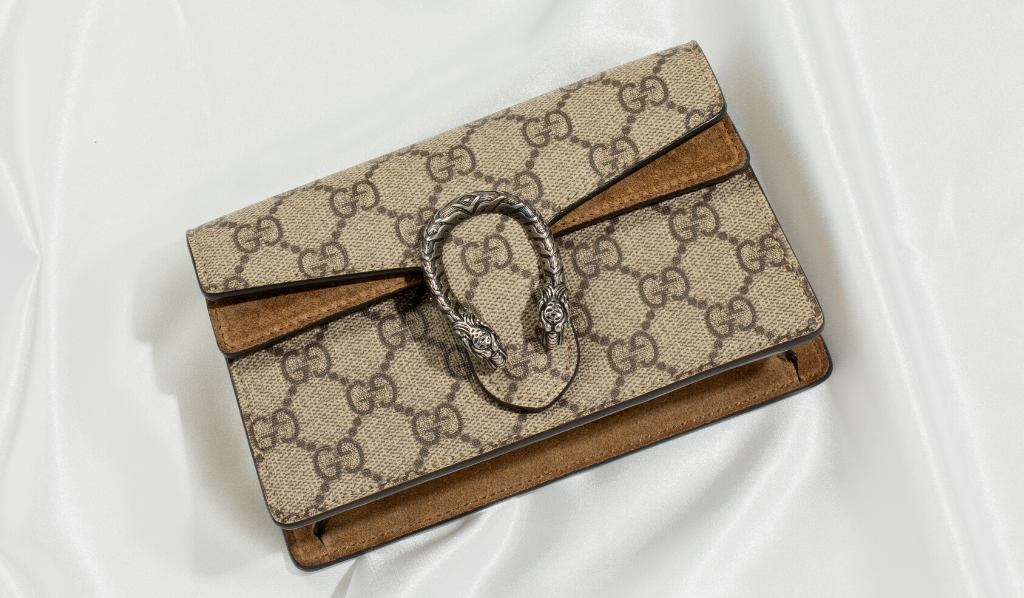 Guccio Gucci’s story begins in London where he was a porter for the Savoy Hotel. During this time he encountered suitcases from around the globe and was intrigued by their design. Years later he would return to his birthplace, Florence, Italy, and work for the luggage brand, Fronzi.

In 1921, Gucci followed in his father’s footsteps and opened his own leather goods store in Florence. His small company specialized in crafting with the finest Italian leathers to create equestrian goods and leather accessories. Over a decade later, Gucci would entrust his three sons in joining the business with the hopes of expanding the brand’s name.

The brand has a reliant nature, a theme that will come up again later on. When there were leather shortages, the brand switched to other raw materials like the hemp fabric with the infamous interlocking ‘GG’ monogram print, along with their iconic bamboo bag handle. These alternative textiles and Gucci branded print are still used in the brand’s high quality products today.

As the Gucci name continued to flourish, its namesake and founder passed away just after the New York City boutique opened its doors. His sons continued to bring his vision to life, however. Due to many celebrity endorsements, the Gucci name quickly and handily established itself as one of the top fashion designers in the US.

In what seemed like a high point for the brand with the first Ready-to-Wear collection debuting in 1981, trouble would soon follow. The Gucci sons, who expanded the brand to Asia, were fighting and the brand was on the verge of bankruptcy.

Again, the brand’s resilience came about when the former Bergdorf Goodman president came on as creative director.  She brought a brand new team of designers, the most notable being Tom Ford. He who would go on to be creative director himself.

Ford’s time at Gucci is most well known for provocative advertising campaigns and for making the brand an important player in the industry. He created memorable fashion trends and brought in billions of dollars a year for the brand.

After Tom Ford left to create his namesake brand, Gucci went through a few creative directors before appointing Alessandro Michele, a long-time designer for the brand in 2015. Michele’s vision focuses on maximalism while staying true to the brand’s top-quality roots. The fashion brand has grown its offerings under Michele, now with restaurants in LA and Florence, home goods as well as beauty Gucci products.

This understanding of Gucci’s history will continue to be important as we explore what makes Gucci so expensive in later sections.

When the brand first became a mainstay in New York, Gucci’s totes were on many an iconic arm. Unisex totes were sported by the likes of Elizabeth Taylor and Peter Sellers in the 1950s. Jackie Kennedy often carried the Jackie bag, which was eventually named after her. The floral pattern Gucci is known for, Flora, was actually designed as a gift for the infamous Grace Kelly, Princess of Monaco.

Celebrities today that are well-known for wearing Gucci include the Kardashian and Jenner sisters, Rihanna, Blake Lively, Kate Moss, and many more. The brand is a mainstay of celebrity fashion and even has been featured in the Metropolitan Museum of Art. This aids Gucci in maintaining its status as an expensive brand.

Millennials continue to be a huge influence on the success of luxury brands, but reaching them comes at high marketing costs. However, Gucci has been successful in reaching this demographic. In fact, sales for the brand doubled its sales in 2018, with “55% of these from consumers under 35.”

As a luxury brand, Gucci has some of the most accessible price points for entry-level designer bags. For example, many of their leather mini and small bags and larger canvas ones are under $2,000.

As a result, many millennial’s first designer bags are commonly Gucci due to its status yet affordability for a luxury brand. This creates loyalty amongst this age demographic for the brand that continues to bring in hefty profits today.

Why Is Gucci So Expensive?

Gucci does not stray far from its roots with clear equestrian influence across many of its products. Some of their most popular items like the Gucci Loafer with horse-bit hardware date back to 1932. Despite reinventing its look often under various creative directors, Gucci has continued to stay true to its beginnings.

That’s not to say Gucci isn’t affordable. Read on to learn more about buying and selling Gucci bags.

How To Buy Affordable Gucci Bags?

With well over 200 boutiques, bags by Gucci are sold almost everywhere in the world. The pre-owned market is also no stranger to Gucci bags with vintage bags on the market dating back many decades.

At myGemma, you can find pre-owned and authenticated Gucci bags at up to 80% off retail. By buying second-hand you’re contributing to the sustainable fashion market while also getting a more affordable price on designer handbags.

How To Sell Gucci Bags?

You never know what your current season or vintage Gucci bags may be worth, get a free quote from leading luxury buyers WP Diamonds. We buy your designer bags in as little as one day with no fees or commissions deducted from your final offer.

Just fill out the online form below to book an appointment in one of our offices in New York, Tokyo, Hong Kong, or the UK, or you can have your items fully insured with free shipping sent right to us. With an A+ BBB rating and 1,000+ customer reviews, we’re your destination for a trusted international buyer of luxury goods.

Get A Price Quote
← How To Sell Designer Jewelry
When And Why Do Relationships End? →