Diamonds are one of the world’s most precious gems. But where do diamonds come from? While diamonds have been discovered in nearly 35 countries worldwide, there are some countries that reign superior in terms of diamond production. From Russia to Australia, we explore the history and production of these top producing countries and their mines. 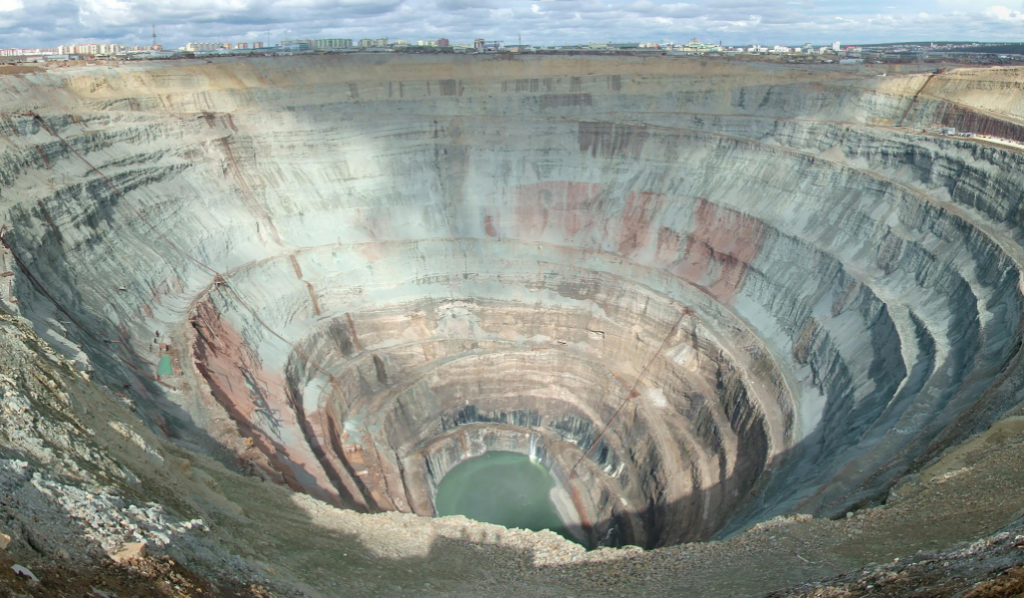 Where Are Diamonds Mined? Top 7 Countries That Produce The Most Diamonds:

Russia has long been known as one of the largest diamond producers in the world. Russia’s most famous diamond mines is the Mirny mine, owned by ALROSA. A Russian group of diamond mining companies, ALROSA currently accounts for over 95% of diamond mining in Russia.

Where are diamonds mined in Russia? While there are many gem quality producing diamond mines in Russia, one of its most important ones is located in Siberia.

The Mirny Mine: Also known as the Mir mine, it is the world’s second largest man made hole. Discovered in the 1950’s by Soviet geologists, this open pit diamond mine is located in Russia’s Eastern Siberia. Conditions are harsh in remote Siberia, with the winter lasting up to 10 months of the year, making it a particularly inhospitable place to live. And yet an entire town has sprung up in Mir as a result of the diamond mine.

South Africa has a long history of diamond mining. Starting with a young man’s discovery of a single transparent stone on his father’s farm in 1867, South Africa soon established itself as a world leader in diamond production.

The African country is renowned for the quality of diamonds produced, one of these being the legendary Cullinan diamond. The Cullinan was the largest rough diamond (of gem quality) to ever be found, weighing in at approximately a 3,106 carats. Alluvial mining, underground kimberlite pipes, and marine mining are all techniques used to discover diamonds in South Africa.

The Kimberley Mine: Also known as “The Big Hole”, this mine opened in 1871 and closed in 1914. Believed to be the deepest hole on Earth dug by hand, it was named after the Kimberlite pipes in which diamonds form. By 1914, the mine had produced over 3,000 kg of diamonds, today it is a historical tourist destination.

The Argyle diamond mine: Located in the Kimberly region, in isolated northern Australia, is the country’s most successful diamond mine. This mine is owned by Rio Tinto and has been in production since 1985. While it used to be an open mine pit mine, it has since transitioned to an underground mine.

The Argyle mine single handedly produces over 90% of all red and pink diamonds in the world, but also produces champagne, brown and blue diamonds. Despite it being the fourth largest diamond producing mine in the world and an important mine in the diamond industry, it is set to close in 2020 due to a recent sharp drop in gem quality diamonds.

Since gaining independence from the UK in the 1960’s, Botswana has established itself as one of the richest African nations. This is largely due to its discovery of a huge diamond mine in 1968, which proved a catalyst in turning the tides for one of the poorest countries in the world.

Part of the reason for their economic growth, rather than the “resource curse” that so many resource rich African countries have suffered from, is that the country has benefited from political stability and good governance with strong anti-corruption policies in place. Botswana is now home to seven well-established diamond mines. The most well known diamond mine in Botswana is the Jwaneng diamond mine.

The third largest diamond producer in Africa, mining in Angola began in 1912 due to its plentiful diamond deposits- specifically in the Lunda Norte and Lunda Sul province. Most of the diamonds in Angola are sourced through ENDIAMA. The most well-established mine in the country is the Catoca mine.

The narrative of diamonds in Canada began when two men, Chuck Fipke and Stewart Blossom, discovered a kimberlite pipe filled with diamonds in the Northwest Territories in 1991. The first mine opened years later in 1998.

Where are diamonds mined in Canada? Canada now boasts numerous working mines but the two most well-known mines are the Ekati diamond mine and the Diavik diamond mine.

The Ekati diamond mine: Canada’s first surface and underground diamond mine, controlled by Dominion Diamond Corporation (DDC), the Ekati mine opened in 1998.

The Diavik diamond mine: Opened in 2003, the Diavik mine is the largest open pit diamond mine in the world, producing around 8 million carats per year.

The Democratic Republic of Congo (DRC) is the second largest country in Africa, and the third largest diamond producing country in the world (by volume). However the DRC is also the world’s second least developed country.

Despite an abundance of natural resources, such as diamonds, socio-economic problems, a history of civil unrest and human rights violations have limited the economic growth of the country. Almost all diamond mining in the DRC is done by hand. Also known as artisanal mining, the DRC relies heavily on small scale digging rather than commercial mining.

If you are looking to sell diamonds or diamond jewelry, WP Diamonds is here to help. As a leading buyer of diamonds, our team of GIA trained gemologists are on hand to make cash offers on your pieces. Established in 2012, with offices in New York, the UK and Hong Kong, we work with customers from around the world. Our commitment to providing a professional, modern and safe way to sell diamonds has earned us hundreds of online reviews as well as an A+ BBB rating.

With WP Diamonds, selling diamonds is a fast and secure service that takes as little as 24 hours. Sell online or in person, simply click the button below to get your price quote from the diamond experts.