Rolex remains the best-known brand of luxury watches, celebrated for its top-notch materials, distinctive design, reliable performance—and its high prices. Long sought-out by celebrities and serious watch collectors, Rolex prices that reflect its desirability. So if you’re curious about the most expensive Rolex watches (and why some commanded those seven-figure sums), read our list of the top 20 most expensive Rolex watches. 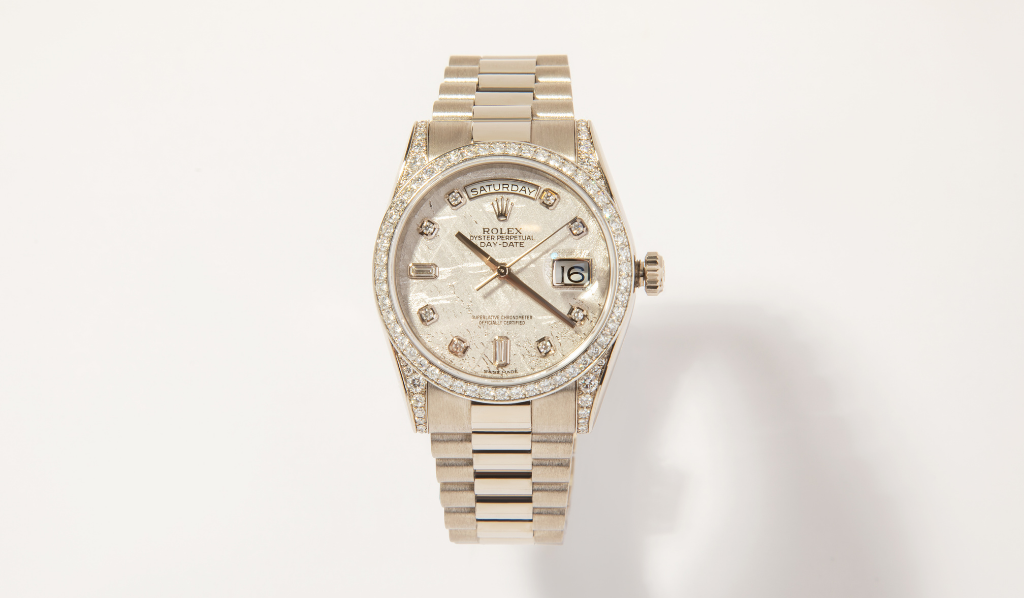 Rolex remains the best-known brand of luxury watches, celebrated for its top-notch materials, distinctive design, reliable performance—and its high prices. Long sought-out by celebrities and serious watch collectors, Rolex prices that reflect its desirability. So if you’re curious about the most expensive Rolex watches (and why some commanded those seven-figure sums), read our list of the top 20 most expensive Rolex watches.

What Are The Most Expensive Rolex Watches?

Topping the list of most expensive Rolex watches is Paul Newman’s Daytona. This watch stands as the most iconic of all Rolex Daytona watches, auctioned at a record breaking $17,752,500. The watch was purchased by Paul Newman’s wife as she worried about him getting into an accident due to his passion for motor racing.

She had the watch’s caseback engraved with “DRIVE CAREFULLY ME,” an equally loving and humorous gesture. Geoff Hess, CEO of Analong Shift stated, “This watch appeals to people way beyond the watch world. . . It of course attracts those who love and admire motor sports and cars, it also appeals to people who love Hollywood memorabilia. It’s also a piece of Americana, so it appeals to the American history community.”

The watch’s dial is dark brown, which contrasts its white outer trim, features an Art-Deco font, black and red minute track, and square ends on its subdial markers. This extraordinary timepiece has perfectly captured Paul Newman’s iconic style, making it one of the most desired watches among vintage collectors.

Made in 1970, this Daytona Reference 6265 earned the nickname Unicorn because it was the only model made in 18K white gold at a time when the Daytona was usually made in stainless steel. That rarity meant that when renowned watch collector John Goldberger put the watch up for auction at Phillips in Geneva in 2018, it achieved a price of nearly double the original $3 million estimate; Goldberger then donated the proceeds to charity.

Owned by the last emperor of Vietnam’s Nguyen dynasty, the Bao Dai made the list of most expensive Rolex watches because it was the rarest configuration of Rolex’s 6062 model. During a peace negotiation recess in 1954, the Nguyen emperor asked a Rolex retailer for the rarest Rolex available.

Made with 18K yellow gold, the watch features diamond indexes as well as a triple calendar with moon phase indicators. Of the three models known to have existed, the Bao Dai has its diamond indexes on the even hours, rather than the other two watches with diamond markers on the odd hours. The diamond marker at 12 o’clock forced the trademark Rolex crown to be located below the diamond index, making it the only dial of its kind known in the world.

Aurel Bacs, senior consultant for Phillips in association with Bacs & Russo called this timepiece, “a work of art. It’s part of what the 20th-century culture is made of. It’s what we, mankind, jointly want to hold onto, and it would absolutely make sense to put it in a museum where the best of the best of the 20th century is reunited. It’s really a landmark of the 20th-century industrial design.”

The emperor thoroughly enjoyed the watch over the years until he died in 1997. The Bao Dai has exchanged hands only once in 2002, achieving a record breaking auction price of $235,000 at the time. This past May, the Bao Dai sold for an impressive $5,060,427 and remains as one of the most significant collector watches in the world.

A yellow gold “Paul Newman” with screw-down pushers made in 1969, this Daytona was one of the earliest 6263s ever made. For many years, its very existence was debated among watch collectors—hence its nickame “The Legend”—and it sold for more than three times the estimate when it finally came up for auction in Geneva in 2017.

According to The Robb Report, this watch achieved its price at the Phillips’ May 2017 auction in Geneva because of its oversized subsidiary dials and unusual color combination. Made in 1966, with a “pre-Paul Newman” dial (hence the “Neanderthal” nickname), this represents the first Cosmograph with screw-down chronograph pushers, a detail that enhanced the timepiece’s water-resistance.

Rolex has been an active sponsor of racing events since the 1930s and gifted the Antimagnetique watch to a select group of racing teams and drivers. Only 12 of these Reference 4113 were made and only eight are believed to still exist.

Encased in stainless steel, the 44mm dial of this 1942 watch features raised pink gold Arabic and baton hour markers with a subtle patina. The bezel has a mirror-polished finish, contrasting brilliantly against the case. As this watch was never for public sale, it well coveted by collectors and was sold in 2016 for nearly $2.5 million.

Rare because of its “tropical Paul Newman” dial in chocolate brown and its red minute track, this 1969 stainless steel chronograph brought well over its estimate when it was auctioned by Phillips in May of 2016.

With the same reference as the famous “Bao Dai,” this 1953 model was one of only three Rolex references to feature a moonphase—a relatively pricey complication more common to  reserved for dress watches—and experts estimate that only 200 to 300 were ever made. Here, the triple calendar moonphase is married to a waterproof Oyster case creating a hybrid that brought nearly $2 million when it was auctioned in 2017.

Worn by Marlon Brando during the filming of Apocalypse Now, this 1972 Reference 1675 sold for $1.952 million when it came up for auction at Phillips in December of 2019—after a 15-minute bidding war that saw the watch far exceed its original estimate.

A black dial worn on black strap, this GMT-Master is also notable because, at the request of director Francis Ford Coppola, Brando removed the bezel so its glitter would not draw undue attention to the watch during Colonel Kurtz’s scenes. Brando also carved his name on its back.

A two-way tie for tenth place: the oversized 1942 stainless steel chronograph that represented one of only 12 examples of the 4113 reference ever made, and a 1952 pink gold triple calendar with star-set “stelline” numerals and a moonphase. (Both sold for the same price on the same day at the same November 2019 auction in Geneva.)

Made in 1974, probably as a special order for a member of Middle Eastern royalty, this stainless steel Daytona had a black face distinguished by Arabic-Indic numerals.

One of about only 20 “Paul Newman Oyster Sotto” watches known, this 1969 stainless steel Daytona caused considerable excitement when it came up for auction in Geneva in May of 2018 arriving unpolished complete with guarantee and presentation box.

Nicknamed “Albino,” Eric Clapton’s Daytona sharply diverged from standard Rolex designs. (Clapton is such a devoted watch collector that he called his greatest hits record collection Timepieces.) This watch is one of the only four known examples of a Daytona with monochrome dial and matching complication subdials (unlike Rolex’s standard contrast-color subdials) an unpopular variation that made the dials more difficult to read. Sold at an auction house in 2015, the Albino brought nearly five times the price it had achieved in 2003.

Rolex gave this 18K yellow gold Day-Date to the legendary golfer—who is also a longtime Rolex brand ambassador—in 1967, and it stayed on his wrist for decades afterward, including tournament play for 12 of his championship titles, including the U.S. Open and assorted Masters Tournaments and PGA Championships. Nicklaus auctioned it in December of 2019, with proceeds going to his Nicklaus Children’s Health Care Foundation.

Famed as the watch worn by blinged-out soccer star Cristiano Ronaldo during the Dubai International Sports Conference in 2020, this variation on the GMT Master II is made in 18K white gold covered in nearly 30 carats of diamonds over its case, bracelet, dial, and bezel.

Worn by Roger Moore when he played James Bond in 1973’s Live and Let Die, this Submariner boasted a bezel modified to look like a saw since the screenplay dictated that Bond use it to cut a rope during the movie. (In the film’s plot, it also had a magnetic field that was strong enough to unzip the dress of a Bond girl.)

Signed on the back by Roger Moore, this Submariner set a record price at auction in 2015—even though it was so heavily modified for the movie that it no longer tells time.

Released in 2011, this limited-edition Pearlmaster was based on the Day-Date (rather than the Datejust), and featured a 39mm dial framed by a custom bezel using 42 diamonds.

Some say this is the watch that started it all. When this 1967 Submariner came up for auction in 2009, it realized the highest price ever paid for a Rolex—undoubtedly because it was once owned by Steve McQueen, the movie star who was the best-known watch collector of his time.

Although its price varies according to the size of the dial (both 34mm and 39mm are available), whether or not the bracelet is completely covered in diamonds, and the fluctuating price of diamonds and gold, the diamond and gold Pearlmaster is currently Rolex’s most luxurious collection, available to anyone with the cash and connections to acquire one.

Selling Your Rolex Or Other Luxury Watch?

Has our list of the top most expensive Rolex watches inspired you to update your watch collection? At WP Diamonds, we offer a fast and safe way to sell your luxury watches in as little as 24 hours. Simply fill out our online form to receive a price quote or call our luxury watch experts on 646 758 0270.

Our secure and professional service has earned us an A+ BBB rating. Your items will always be insured, trackable, and opened on camera. As the leading online luxury watch buyer we have hundreds of reviews from satisfied customers, making WP Diamonds the best place to sell your luxury watches.