Formed at 500km below the Earth’s crust, often over 3 billion years old, diamonds are created when carbon is subjected to both huge pressure and heat. The rarest diamonds are those exceptionally large in size, or with remarkable color and clarity. 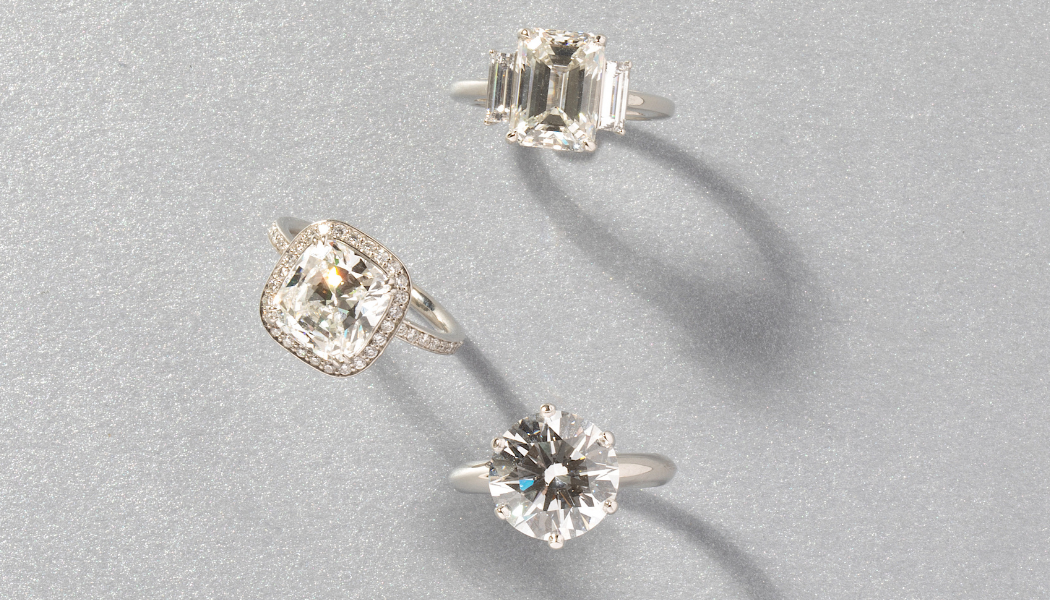 WHAT ARE THE TOP 10 MOST EXPENSIVE DIAMONDS?

Starting our list of the top most expensive diamonds in the world is the Moussaieff Red. Discovered in Brazil in the 1990’s and formerly known as the Red Shield, it is currently the largest natural-colored fancy red diamond graded by the Gemological Institute of America (GIA). Red diamonds are among the rarest and most sought after diamonds in the world.

A triangular brilliant-cut, it is sometimes cited as a trilliant cut, weighing 5.11 carats. Graded as internally flawless (IF), this fancy red stone was exhibited at the Natural History Museum of the Smithsonian Institution in 2003 and 2005. The Moussaieff Red Diamond was displayed as part of the eight most incredible diamonds in the world, thus, magnifying its prominence in the diamond industry.

Blue diamonds represent only 1% of all mined fancy colored diamonds. The Heart of Eternity, a fancy vivid blue, was mined in the South African Premier Diamond Mine. An exceptionally rare diamond thanks to its lack of gray or black undertones, this stunning heart shaped stone was originally cut from a 777ct rough diamond.

The original owner of The Heart of Eternity was the Steinmetz Group, but De Beers later bought it in 2000. Rumour has it that in 2012 boxer Floyd Mayweather purchased the diamond for then-fiancée, Shantel Jackson. This has not however been confirmed by De Beers.

In 2010, Christie’s sold The Perfect Pink to an unknown bidder. This Fancy Intense Pink is a 14.23 ct emerald cut diamond. What makes this gemstone so rare is both its size and intensity of pink. It has a clarity grade of Very Very Slightly Included 2 (VVS2) due to slight internal blemishes, which is common in diamonds such as The Perfect Pink.

At a whopping 35.56ct until 2010 when it was recut to 31.06ct, the Wittelsback Diamond made history having been passed from one European member of royalty to another. This fancy deep blue , internally flawless diamond has belonged to both Spanish and German royalty since it arrived in Europe in the 1600s. The highly controversial recut in 2010 triggered backlash among the gemology community but did improve the color and the clarity to fancy deep blue and internally flawless.

Originally called the Fancy Vivid Blue Diamond, this stone was renamed “The Winston Blue” after Harry Winston purchased it in 2014. Weighing in at 13.22ct, it is the largest diamond of its kind said to be graded by the GIA. This pear shaped internally flawless diamond cost almost $2 million per carat when it sold in 2014, setting a new world record for the price per carat of a blue diamond.

Mined in South Africa in 1999, the Pink Star, previously known as the Steinmetz Pink, is the largest diamond to have been graded a Fancy Vivid Pink. Chow Tai Fook Enterprises, a Hong Kong, bought the Pink Star from Sotheby’s auction in 2017 in a telephone bid. An internally flawless, oval diamond weighing a huge 59.60ct, this gemstone was later renamed to CTF Pink Star in memory of the current Chow Tai Fook chairman’s late father.

As a rough diamond, the Centenary Diamond weighed over 500ct. It was later cut to a modified heart-shape, weighing 273.85ct. The sacrifice in carat weight, however, improved the color (D) and clarity grade (flawless) of this unique diamond. It took a total of 154 days for their highly-skilled team to finish the re-cutting process.

Believed to have been discovered in India in the 1600s, the Hope Diamond was bought by King Louis XIV in 1668. This 45.52 carat Fancy Dark Gray-Blue antique cushion cut diamond was later stolen during a crown jewel looting in 1791 but resurfaced in London in 1839. Fast forward to 1949, Harry Winston purchased this diamond and donated it to the Smithsonian Institution, attracting many tourists. The stone is rumored to be cursed due to the misfortune and tragedy that many of its previous owners experienced.

The Cullinan is the largest rough diamond of gem quality ever found, weighing an incredible 3,106.75ct . Discovered in Cullinan, South Africa in 1905, it was then gifted to King Edward VII. The rough diamond, also known as the Star of Africa, was cut into 9 main stones, the largest of which is the 530.2ct Cullinan I.

The controversy behind the stone lies in claims that Britain stole the stone from India and that it rightfully belongs to India. Rightly or wrongly, Britain acquired the stone in 1850 and in 1852, Prince Albert had it cut from 186ct to 105.6ct to increase its brilliance and sparkle. The colorless oval-cut diamond is also known as Mountain of Light and the Diamond of Babur.

Where To Buy Affordable Diamond Jewelry

Where Can I Sell My Diamond?

Below we list some of the most popular way to sell a diamond:

Auction House – Auctions are a good choice for extremely rare diamonds. However, there is no guarantee that your item will sell and the process can be very time-consuming. In addition, the auction house will charge a percentage of the final sale price.

Consignment – While consignment can be a good option, the two main drawbacks are how long it can take for your diamond to sell and the fees charged by the jeweler if it does sell.

eBay/Craigslist – This is a popular option however with no diamond experts to advise you on the value of your diamond, many people unfortunately undersell when they take this route.

Online Diamond Buyer – As a leading online diamond buyer, you are sure to sell your item quickly and safely when working with WP Diamonds. We buy your diamonds directly and give our customers the option of selling online or via appointment.

Our team of GIA trained gemologists can accurately assess and price your diamond based on the current secondhand market. The entire process can take as little as 24 hours, from filling out the online form to receiving payment. Simply fill out the online form below to receive a price quote for your diamond. With an A+ BBB rating and hundreds of online reviews, you can sell your diamond to the experts at no risk.