Celebrities’ engagement rings have long been some of the most valuable, sensational pieces of jewelry in the public eye. 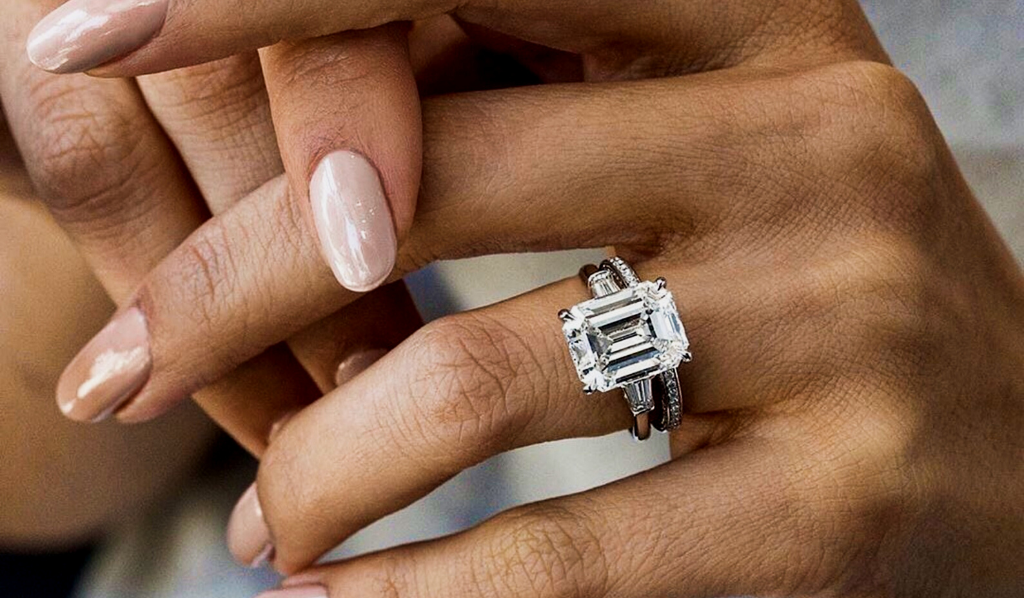 From Jackie Kennedy’s 40.42-carat diamond to Kim Kardashian’s stolen ring, take a look below at the top 10 most expensive celebrity engagement rings.

Jackie Kennedy’s 40.42-carat Harry Winston diamond is the third-largest gem cut from the famous 601-carat Lesotho rough diamond. In 1996, the ring sold at Jackie Kennedy’s estate auction for $2.6 million. Also known as the Lesotho III, it was given to Jackie in 1968 by Aristotle Onassis, a Greek shipping mogul. Due to the size and value of the diamond ring, Jackie reportedly only wore the ring twice before storing it in a safe. The diamond was a marquise-cut, VS2 clarity and L color stone.

In 2003, Kobe Bryant presented Vanessa Bryant with a purple, 8-carat engagement ring valued at $4 million. Dubbed the “apology ring”, Kobe bought the ring after a high profile criminal case in which he was found guilty. Despite their many ups and downs, the couple are still together to this day.

Film star Grace Kelly met Prince Rainier II of Monaco at a 1955 photo shoot at the Cannes Film Festival, marking the beginning of one of the most famous love stories. Prince Rainier proposed to Kelly with a beautiful Cartier ring made up of a 10.47-carat emerald-cut diamond surrounded by two baguettes. A legendary style icon, Grace Kelly’s elegant engagement ring featured in the movie High Society.

Though Jennifer Lopez’s 6 carat pink diamond ring from ex-fiancé Ben Affleck made headlines in the early 2000s, Marc Anthony was able to top that proposal with an even more expensive 8.5 carat blue diamond ring. Colored diamonds are incredibly rare, more so than white diamonds.

Though the engagement dissolved after 4 months, Paris Latsis gave Paris Hilton a 24 carat, $4.7 million engagement ring. Paris reportedly said that the ring was so large that it hurt her finger. After their separation, Hilton auctioned off the ring to benefit the victims of Hurricane Katrina.

Jeweler Lorraine Schwartz created this 18 carat emerald-cut diamond ring for Jay-Z’s proposal to Beyoncé. The two ultimately married in a private wedding in Manhattan in 2008. With a split shank, this large $5 million diamond ring is a bold, statement piece.

Kim’s engagement rings have been heavily publicized, especially after the upgraded diamond ring was later stolen in Paris. Kanye West initially proposed to Kim Kardashian with a 15 carat, cushion-cut, D color, flawless diamond from Lorraine Schwartz and was heavily involved in the design process. He later gave her a second diamond ring that was stolen shortly after in 2016.

One of the most famous diamonds on our list is Elizabeth Taylor’s Krupp Diamond, given to her by Richard Burton in 1968. The Krupp Diamond is a 33.19 carat, D color, VS1 clarity, asscher-cut diamond. Burton purchased the ring at auction and presented it to Elizabeth Taylor on a yacht in London. She loved the ring so much that she frequently wore it in movies she acted in. This legendary diamond sold at Taylor’s estate auction in 2011 for $8.8 million, breaking the existing price per carat record in the process.

In 2016, Kanye West upgraded his wife’s engagement ring with a 20-carat, emerald-cut Lorraine Schwartz ring, engraved with the word “Adidas” on the inside to celebrate West’s recent Adidas deal. Just a few months after Kim’s receiving the ring, the ring was stolen from her at gunpoint in a Paris heist.

The most expensive celebrity engagement ring on our list is Mariah Carey’s enormous 35 carat emerald-cut ring from billionaire fiancé James Packer. The ring was created by New York jeweler Wilfredo Rosado, who designed the ring to be as large and extravagant as possible. Mariah joked that the ring was so heavy, she struggled to lift her arm. The couple later went on to end their relationship in 2016.

What Makes Engagement Rings So Expensive?

These factors all work in combination to determine the ultimate value of an engagement ring. To find out how much your engagement ring is worth, click the button below and we will be in touch shortly with a quote.

How To Sell Or Upgrade Your Engagement Ring Online

If you are interested in selling or upgrading your engagement ring, we provide a quick 4 step process:

WP Diamonds offers a quick, secure service for selling your diamonds, designer jewelry, and luxury watches. Sell discreetly online or via appointment and get the best price for your engagement ring.

Get A Price Quote
← Sell Diamonds, Jewellery And Watches From Australia
How To Take Control Of Your Finances After Divorce →