Have you ever asked yourself the question: “What birthstone am I?” A birthstone is a specific gemstone which correlates with the month of someone’s birth. The birthstone chart lists the twelve months of the year with their respective birthstones. 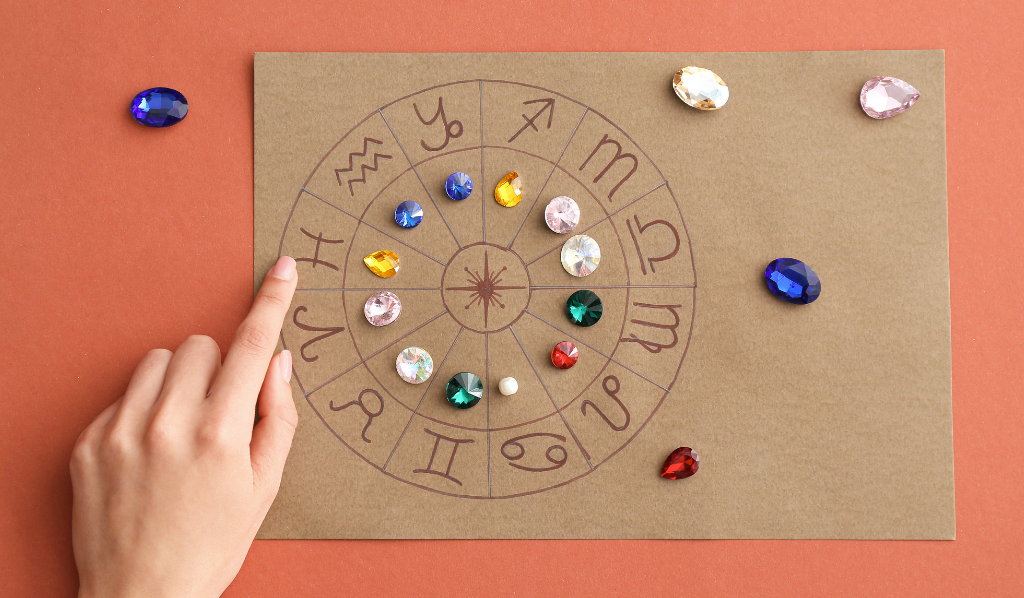 Typically defined by the Zodiacal calendar, birthstones have a rich tradition throughout the world. They were officially standardized in 1912 by the American National Association of Jewelers. The National Association of Goldsmiths in Britain the created another list in 1937. Here’s what you need to know about each month’s stone according to today’s standard birthstone chart:

What Is My Birthstone Based On My Zodiacal Sign?

What Is My Birthstone Based On My Birth Month?

Click on a month for more information about its birthstone:

Starting off the birthstone chart in January. January gets a very unique birthstone in garnet, a rare gem found in many places throughout North and South America, India, Asia, Spain and Australia.

Garnet can be pure red in color, which is what most people think of when the stone is mentioned. It can also contain shades of dark green and black, however; some garnet is even colorless in appearance. The stone gets its brilliance from a combination of metals, including iron, aluminum and manganese.

Amethyst has long been one of the world’s most cherished stones. Not necessarily due to its value but instead of its brilliant purple color. A variety of quartz, Amethyst can be cut into many different shapes and sizes.

These precious stones can range in color intensity from a faint lilac to deep, inky purple, with many variations in-between. While the gem continues to be mined, much of the amethyst sold today is manufactured in a laboratory environment.

There is not one birthstone for March but two: aquamarine and bloodstone. It is the former of the two that gets the most attention, however, and for good reason. Characterized by colors of the sea, aquamarine stones can range from deep blue to a lighter color with radiant greenish hues. The stone is often as clear as the ocean itself, symbolizing purity in its truest form.

Aside from being the stone that everyone knows about, diamonds are unique in their toughness. Made only from carbon, they are structurally harder than anything else in nature and can only be cut with other diamonds. While diamonds can be costly, they can last a lifetime when properly cared for.

If you were born in May, your birthstone is Emerald. A prized gem that lives up to its reputation for brilliance. A stone in the beryl family (along with Aquamarine) that gets its luminescent green hues from the metal chromium, Emerald is typically found in a type of sedimentary rock called shale. Perfect emeralds are exceedingly rare and can command incredible amounts of money.

While June was once recognized with moonstone and then pearl, today, alexandrite is most commonly used as the June birthstone. Originally thought to be more abundant than pearl, alexandrite is actually harder to come by.

High-quality examples of the stone are very much sought after by collectors. The stone tends to be greenish-blue in color and can shift hues in incandescent light. Alexandrite is quite the showstopper when incorporated into rings, earrings or necklaces.

One of the world’s most coveted gems, the ruby represents love and passion: a perfect birthstone for the month of July. In the industry, ruby gemstones are often defined by the amount of purple hue that can be seen in the deep red stone; called “pigeon’s blood” by experts in the field. Chromium is responsible for the saturated red color that defines ruby. The more present the metal is in a ruby stone, the deeper shade of red it will be.

August’s birthstone, peridot, is one of the more ancient gems on the birthstone chart, despite often flying under the radar of gemstone enthusiasts. Often found in volcanic lava in Hawaii, the peridot gem was once held in high regard by Egyptians. They believed it to hold healing powers. Peridot is always some shade of green and tends to be light in appearance—particularly when compared with emerald.

Characterized by its warm, blue-ish tones, Sapphire is a prized gem. It rivals ruby in its brilliance despite being on the opposite end of the color spectrum.

The gem symbolizes truth, fertility and nobility, and like peridot, ancient humans believed it to have its own special healing powers. While blue is the most common color of sapphire, the stone can actually be found in a variety of other shades. This includes green, aqua and even faint purple.

Opal has been associated with October for so long that common folklore deems it bad luck to wear the stone during other months of the year. Though the kaleidoscopic luminosity of opal is nothing short of breathtaking. It lacks the type of durability often required for use in jewelry.

As a result, pink tourmaline—a different, but equally attractive stone— has traditionally been used as an alternative to opal as the birthstone for October.

November birthdays have the choice between two stones: topaz and citrine. The two are unrelated to one another, with topaz belonging to the family of silicate materials and citrine being a type of quartz. Because quartz is more readily available, topaz tends to be the more expensive of the two. It can come in a rainbow of different colors, while citrine is typically defined by its orange and yellow hues.

December comes with options when it comes to birthstones, with tanzanite, zircon and turquoise all falling under the month’s umbrella. Though all three December birthstones vary from one another in color, each brings to the table a unique shade of blue that pairs beautifully with stones such as white sapphire.

Because tanzanite, zircon and turquoise are all durable and relatively inexpensive stones, they are perfect for building out a collection of attractive jewelry not only for the month of December, but for the rest of the year as well.

If our birthstone chart has inspired you, you may be considering a birthstone gift.

Birthstones make the perfect gift and can be incorporated into a wide range of different types and styles of jewelry, from earrings and necklaces to rings, accent pieces and more. Birthstone jewelry is often chosen for its meaning and sentimentality, but that doesn’t mean such pieces can’t also be visually stunning as well.

Browse modern and traditional birthstone jewelry pieces and find the perfect gift no matter who you’re buying for.

At WP Diamonds, we buy designer birthstone jewelry from brands such as Bulgari, Van Cleef & Arpels, David Yurman and much more. Whether you are looking to sell Tiffany blue topaz rings or Cartier ruby necklaces, our experts are here to help.

Our streamlined and professional service can take as little as 24 hours from start to finish. This is because we buy your designer jewelry, diamond jewelry, luxury watches and handbags directly. There are no fees or commissions deducted from our final offer. We are proud of our A+ BBB rating and over 1,000 customer reviews.