One of the largest and most highly regarded luxury watch brands in the world, Rolex has dominated its market for decades. Rolex timepieces have traveled the world, from the summit of Mount Everest to the lowest point of the Mariana Trench, and been worn by everyone from John F. Kennedy to Pablo Picasso to Brad Pitt. Here, we review the current top 10 most popular Rolex watches. 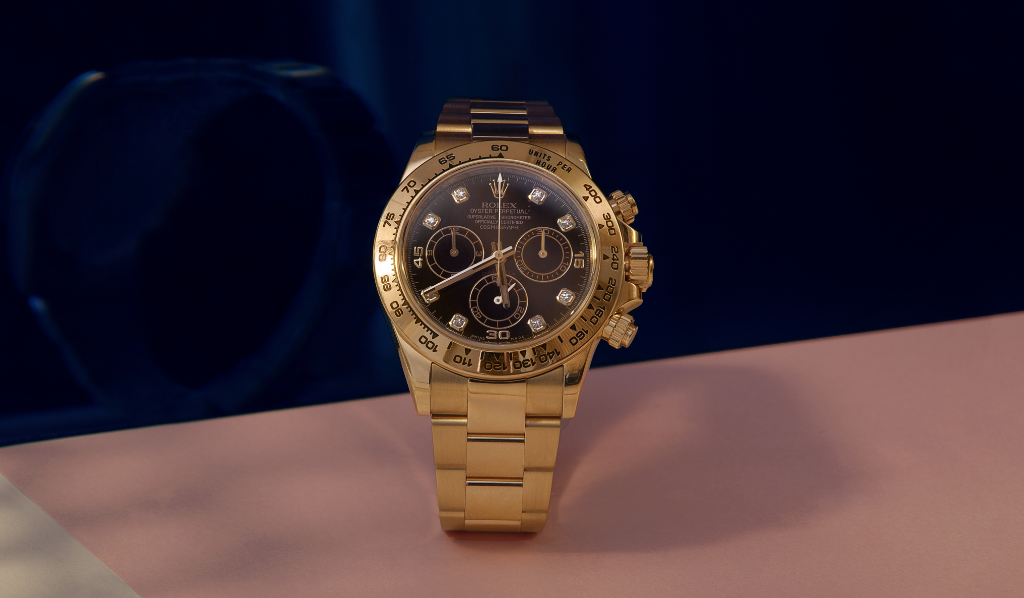 What Are The Most Popular Rolex Watches?

Topping the list of the top 10 most popular watches is the iconic Rolex Submariner. Debuting in 1953, the Submariner was the first watch to stay waterproof up to 100 meters and was designed with a unidirectional, rotating bezel engraved with a 60-minute gradations, so that a diver could monitor air reserve and decompression. Just as importantly, its dark dial, chunky case, and functional bezel of this dive watch set a standard of style for Rolex.

An instant hit when it debuted in the 1950s, the Submariner originally sold for around $150 to $200. Today, a Submariner from that era may command $25,000 to $500,000. Current models of the Submariner closely resemble the original models—although they are now 1954 counterpart, though current models are now water resistant up to 1000 feet.

Introduced in 1945 to commemorate the 40th anniversary of Rolex, the Datejust was the first self-winding, waterproof watch to feature an automatically changing date so that the wearer could see both time and date at a glance—a convenience soon copied throughout the industry.

Introduced in 1963, the Daytona was named for the prestigious race venue (which had made Rolex its official timekeeper the year before). Designed for professional drivers, the watch featured a tachymeter scale on its bezel that was much larger than normal—a bit of form follows function that helped to give Daytona its distinctive look. In 2017, a Daytona set the record for the most expensive Rolex ever sold when the watch owned and worn by actor/race car driver Paul Newman it brought $17.8 million at auction.

Inspired by the request of Pan American for a pilots’ watch that could display two time zones simultaneously, the GMT-Master launched in 1955 (its GMT standing for Greenwich Mean Time) as an adaptation of the Datejust  featuring a fourth hand and an outer bezel to show the time in multiple time zones. In 1985, the GMT-Master II was released, with an updated movement.

The Yacht-Master combines form and function to create a stylish, practical watch for sailors and regular consumers alike. Eric Clapton’s Yacht-Master prototype, which he wore in the 60s and 70s, decades before the Yacht-Master was officially released, was sold at auction in 2003 for an impressive $125,000.

Rolex had been supplying Himalayan expeditions with watches for years before 1953, when Edmund Hillary wore a Rolex Oyster on his successful attempt to summit Mount Everest—the same year that Rolex debuted the Explorer with references 6298 and 6350. Created with mountaineers in mind, the Explorer was more understated than most other Rolex sports models and quickly became known for its distinctive 3/6/9 dial, allowing it to do double duty from sports watch to dress watch.

Launched in 2012, the Sky-Dweller quickly became known as a business travelers’ watch. Building on the heritage of the Rolex Oyster, the Sky-Dweller featured a dual time zone display with an oversized 42mm case, and a caliber 9001—the most complex ever developed by Rolex.

Displaying local time with the conventional hour, minute, and seconds hands displays and a second time with an offset hour display, the Sky-Dweller has a linked automatic date change that uses a super efficient Saros annual calendar that is able to make automatic adjustments between 30-day and 31-day months.

Introduced in 2007, the Yacht-Master II built on its predecessor with a giant 44mm case and the first-ever programmable countdown with a mechanical memory.

Designed for professionals who worked in laboratories, power plants, and medical facilities, the Milgauss was introduced in 1956, at a time when the Cold War was raging, and was the first Rolex to shield its mechanics from magnetic fields. Its name is a Rolex-coined compound of mille, the French word for a thousand, and gauss, a unit of measurement of magnetic fields.

Instantly recognizable as the model that Rolex introduced in 1945, today’s Datejust 31 is a sturdy, waterproof, function-forward watch that never seems to go out of style. Beginning in 2018, Rolex began equipping Datejust 31 models with its calibre 2236, which the brand calls “at the forefront of watchmaking technology.”

Where To Buy Rolex Watches For The Best Prices?

The best way to buy authentic Rolex watches for  the best prices is to shop pre-owned. myGemma sells pre-owned modern and vintage Rolex watches, expertly authenticated by a team of in-house specialists. From Rolex Datejusts to Submariners to vintage Bubblebacks, browse a wide range of Rolex watches at up to 50% off retail.

How To Sell Or Upgrade Your Watch Collection

If you would like to sell or upgrade your current watch, perhaps to one of the Rolex models on this list, WP Diamonds is here to help. WP Diamonds has an A+ rating from the Better Business Bureau because we offer a quick, secure service for selling luxury watches, jewelry and handbags online. We buy a wide range of iconic models, from the Oyster Perpetual to the Rolex Day Date, from yellow gold to white gold to stainless steel.

Simply fill out the online form and one of our in-house experts will be in touch shortly with an initial price quote. If you would like to upgrade your watch, you can get up to 10% more on your offer in the form of store credit with our local jewelry store partners.

Now that we have reviewed the top 10 most popular Rolex watches, you may be wondering how Rolex became so successful? In 1905, German-born Hans Wilsdorf, who had apprenticed in the Swiss watchmaking industry and had moved to London to work for a British horologer, partnered with Alfred Davis to found watchmaking firm Wilsdorf & Davis in Hatton Garden. In 1908, he changed the fledging firm’s name to Rolex on the grounds that the new, made-up name was short, easy to remember, and easy to pronounce.

By 1926, when it introduced its Oyster (the world’s first waterproof watch), Rolex had made its reputation for innovative, superbly engineered timepieces. A trend that it has continued into the 21st century with the invention of the Deepsea, a waterproof watch able to withstand depths 100 times what any human could endure.

← Top 8 Louis Vuitton Bags
How Much Is My Ring Worth? →